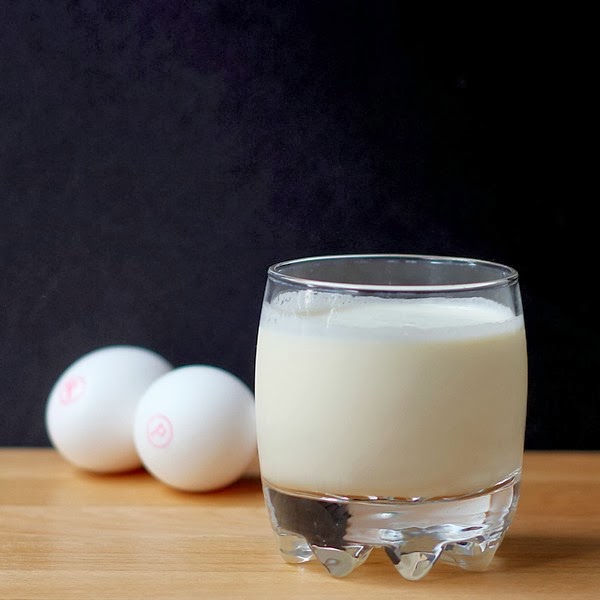 I never liked eggnog until I tried some made by a local dairy. Then I fell in love. Good thing it's a seasonal beverage, or I'd be buying it way too often.


I'd been wanting to try making my own eggnog for quite some time, but hadn't gotten around to it. I was also very curious about uncooked eggnog.

But I held back from making it.

I'm not terrified of raw eggs - I mean, there's always cake batter. But a batch of eggnog is a lot of eggs, compared to a taste of cake batter.

When my friends at 37 Cooks were sent some of Davidson's Safest Choice Eggs, I knew right away that I was going to make eggnog. No doubt about it. Because those eggs are pasteurized.

I've also used some of the Davidson's pasteurized eggs for recipes where I cooked them, and I've got to say that there's no weirdness that comes with the pasteurization. Raw, the whites looked just a little bit cloudy and maybe a tad thick, but other than that, I didn't see any difference.

I used the eggnog recipe from Alton Brown's book, Good Eats 2: The Middle Years. I saw him make the recipe on his show, and if I was going to trust anyone with a raw-egg eggnog, it was going to be AB.

I changed up his flavors, though. Instead of bourbon, I used Crown Maple, and I left out the nutmeg. I like nutmeg in some things, but I'm just as happy to leave it out of some things. I thought the maple would be enough flavor without muddying it up with nutmeg.


Since this version isn't cooked, it's not as thick as the eggnog I used to buy from the local dairy. Because it's beaten, it actually seems light. If you can call something light that's got heavy cream in it.

But this was a very pale creamy color. Definitely not yellow.

Just for the fun of it, I made eggnog ice cream from this recipe as well. I just put about 4 cups of it into the ice cream machine and let it churn. Pretty good.

I might also try the cooked version of Alton Brown's eggnog closer to the holiday, but for now it's great to be able to use pasteurized eggs in the uncooked version.

Eggnog
by Donna
adapted from Good Eats 2: The Middle Years by Alton Brown

In a medium bowl, beat the egg YOLKS until they lighten in color and thicken. Add the 1/3 cup sugar slowly and keep beating until you have a smooth thick mixture.

Add the milk and cream and whisky slowly, stirring it in.

In a very clean stand mixer bowl, with the mixer fitting with a very clean whisk attachment, beat the egg whites to soft peaks. Then, while the mixer is running, slowly add the Tablespoon of sugar and continue beating to stiff peaks. (You can do this at the same time you're beating the yolks separately. Just keep an eye on those whites so you don't overbeat.)

Whisk the egg whites into the yolk mixture. Chill well and serve.

I received eggs from Davidson's Safest Choice Pasteurized Eggs through 37 Cooks.
37 Cooks members receive products from our sponsors to work with to create their posts; no other compensation is given. All content is solely the opinions of our members. Members also write non-sponsored posts that do not feature any products. These are not compensated in any way..