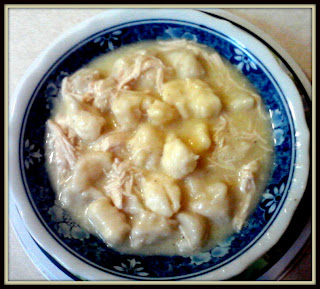 This southern dish is loved by all who sample it and is a great way to use your Thanksgiving turkey leftovers! - 37 Cooks

Note: This recipe will make enough to feed a small army, so adjust your ingredient amounts to the portion size you want. Since I always make these for a whole mess of people at a time, this is the recipe I always stick to.

Wash chicken well, place in a medium-sized pot and cover with water. Add 1/2 stick of butter and as much salt and pepper as you like. I never, ever measure salt or pepper. I just throw it in and eyeball it. Bring to a boil, cover and let simmer until chicken is tender and pulls away from the bone easily. I prefer “falling” off the bone, but that's just me. The longer you can allow it to simmer, the better. Remove chicken from broth and allow to cool. Once it's cool enough to handle, pull the chicken away from the bone and set aside.

In a large mixing bowl, dump most of the bag of flour out in bowl, reserving just enough for flouring while pinching or rolling out dumplings. Make a well in the center of the flour and add the shortening. Cut in the shortening, if you're fancy. If you're not, do like me and mix it with your hand. Slowly begin adding milk and working the dough, pulling the flour in from the sides until it becomes a large bowl of dough. Use as much or as little milk as you like but remember, the stickier the dough is, the harder it will to be handle when you get ready to pinch or roll your dumplings.

In a large pot, mix soup, broth, remaining stick of butter and broth left over from cooking the chicken. Mix well and bring to a rolling boil. Now you're ready to do the dumplings. Depending on your liking for dumplings, you can pinch them off into small balls or you can roll them out thin and cut them into strips, then pinch off into small squares. I prefer thin and square but this requires more time and makes a huge mess. However you decide to do your dumplings, keep the “soup” boiling, but reduce the heat to medium-high so the dumplings won't stick to the bottom of the pot. While the “soup” is boiling, add the dumplings and DO NOT, under any circumstance, stir while adding the dumplings. Otherwise, you will have a big pot of goo that you will be able to hang wallpaper nicely with! Keep adding the dumplings and POKE with a large spoon to push down into the soup. Here again, you decide on the amount of the dumplings. Some like them soupy and juicy to eat with a spoon, most folks I know like fork-eatin' chicken 'n dumplings, so I use more dumplings. A nice little bit of information here, if you fancy the soupier dumplings, you can always freeze the dough you don't use for another pot of dumplings at a later date.

Once you have the amount of dumplings you want, turn off the heat and add the chicken, once again POKING, not stirring, the chicken down into the soup/dumpling mixture.

Lesia's original post can be seen here.
37 Cooks members receive products from our sponsors to work with to create their posts; no other compensation is given. All content is solely the opinions of our members. Members also write non-sponsored posts that do not feature any products. These are not compensated in any way..