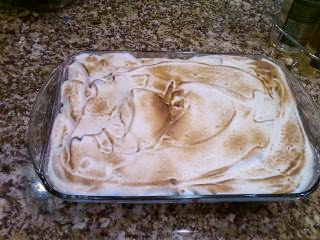 Every year at Thanksgiving, while I was growing up, my mother would make 'sweet potato' casserole. Maybe your mom did too? I soon learned it wasn't 'sweet potato' at all, but instead candied yams. (You know, those things you see in the vegetable aisle next to the canned beans and okra. And no, they aren't the same thing.) Then, I started wondering if this was what everyone else was making instead of good ol' sweet potatoes.


About 15 years ago, while watching Emeril Lagasse Live, Emeril made these magical boozy sweet potatoes with tons of butter and sweet goodness and I thought - I just had to make those! I could practically smell them through the TV. And for about the past 10 years, I made this recipe and would even stick the marshmallows on top and pray that I wouldn't catch my oven on fire!

Last year, my mother started sending me 'Saveur' magazine as a gift (which I LOVE, by the way). And they reprinted a recipe from the previous year for a Sweet Potato Casserole with Bourbon and Pineapple. It had a meringue topping on it, which I'd never tried, and I thought, what the heck! (Plus it gave me an excuse to buy a kitchen torch.) I tried it for the first time last Thanksgiving and it was a hit! I have to admit though, I was very nervous about using a torch for the first time in front of everybody, but it worked out just fine. And don't be nervous about the alcohol in there. There's enough to let you know it's in there, but not enough to make you drunk. As my mother says: it cooks out!

While casserole is baking, place sugar and water in medium saucepan and cook over high heat. Using an attached candy thermometer, cook without stirring until syrup reaches 250˚F. Remove from heat. Meanwhile, in a large mixing bowl add the remaining salt, vanilla and egg whites. Beat on medium-high with a hand-mixer (or use whisk attachment on standing mixer) until soft peaks form. Very slowly add the hot syrup and beat until cooled and thickened.

Remove casserole from oven and top with meringue topping. Using a kitchen torch (this is my favorite part), brown the top of the meringue. If you don't have a torch, you can also brown the meringue under the broiler on high for about 2-3 minutes.
37 Cooks members receive products from our sponsors to work with to create their posts; no other compensation is given. All content is solely the opinions of our members. Members also write non-sponsored posts that do not feature any products. These are not compensated in any way..