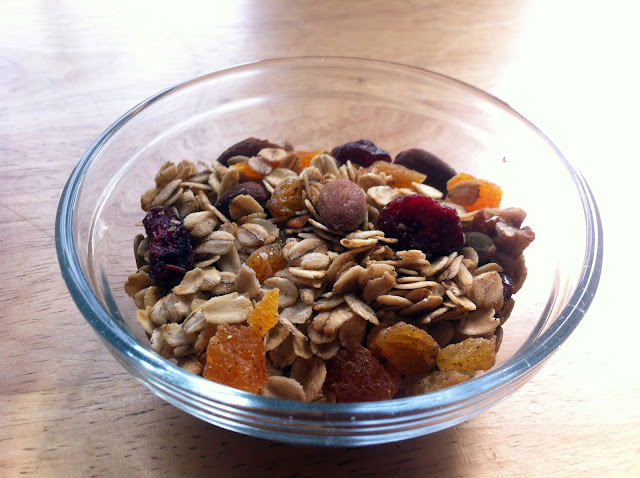 
adapted from In Jennie's Kitchen


Vanilla bean is something that I have never had worked with before. As I am not a huge dessert lover, I wanted something that was a bit sweet, but not something that would give me a sugar rush! When I was looking for recipes to inspire me, I came upon a recipe for Toasted Vanilla Bean Muesli on the blog In Jennie's Kitchen. What a great idea I thought! I enjoy recipes like this because it is very open to variations as to what you put in it according to your individual tastes, like I did with mine.


1 cup of nuts (I chose a mixture of almonds, pecans and pepitas aka pumpkin seeds)

Pre-heat your oven to 300 degrees. Combine the oats, nuts, vanilla been seeds and cinnamon in a large bowl until everything is nicely incorporated together. Next, add the melted butter (I used the microwave in 10 second increments until melted) and stir until everything is coated. Pour the mixture onto a baking sheet lined with tin foil and spread it out evenly to have a uniform layer. Bake for about 15 minutes, check the mixture and give the baking sheet a little shake. At this point your kitchen will smell amazing! Bake for another 15 minutes or so. Remove the mixture and pour back into a large bowl, add the dried fruit and stir to combine. Pour back onto the baking sheet and allow to completely cool. Enjoy the muesli as a snack, in some milk like cereal or (my personal favorite) over Greek yogurt!
37 Cooks members receive products from our sponsors to work with to create their posts; no other compensation is given. All content is solely the opinions of our members. Members also write non-sponsored posts that do not feature any products. These are not compensated in any way..