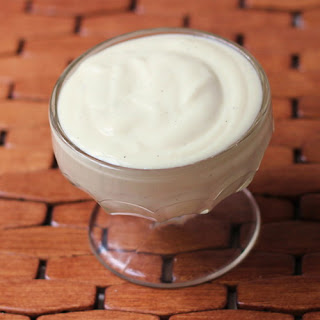 A while back, I went on a chocolate pudding binge, but I have to admit that sometimes I prefer vanilla. Good vanilla helps, and I've got to say that the vanilla beans from Marx fit nicely into that category.

Marx sent a bunch of sample boxes filled with goodies to the 37 Cooks group, and the first thing I grabbed was the vanilla beans.

I'll admit that the first thing I thought of making was ice cream, but then I decided to make pudding instead.This pudding is particularly rich because I used some heavy cream. It's not necessary - milk would do. But I had the cream on hand and I decided to use it.

2 cups heavy cream2 cups milk3/4 cup sugar2 egg yolks1/4 cup cornstarch1/2 teaspoon salt2 Marx Foods Tahitian Vanilla BeansPut the cream, milk, sugar, egg yolks, cornstarch, and salt into a saucepan and whisk well to combine.Cut the vanilla beans open and scrape out the seeds. Add the scraped seeds and the pods to the saucepan. Heat the liquid slowly, stirring as needed, until the mixture thickens and bubbles.Remove the vanilla pods and pass the pudding through a strainer into a storage container. Refrigerate the pudding until cold.*You can rinse the vanilla pods and let them dry, then put them into a jar of sugar to make vanilla sugar, or put  them in vodka.
37 Cooks members receive products from our sponsors to work with to create their posts; no other compensation is given. All content is solely the opinions of our members. Members also write non-sponsored posts that do not feature any products. These are not compensated in any way..