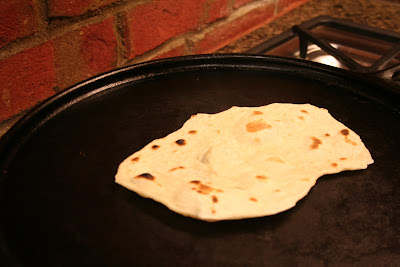 Willie and I have just recently tried Indian food for the first time. Ok, we'd had naan from Trader Joe's but does that count? Why we waited so long, I just don't know? The naan we had at Madras Chettinaad was just fantastic! So we decided we'd try to make some of this at home. I looked all over the internet for recipes. I asked my friends. I looked in my cookbooks using Eat Your Books. My very favorite source was a video I can across. It wasn't even for naan! It was for another Indian bread called roti. I made it for two reasons, 1) there are only three ingredients that everyone has in their kitchen and 2) the video is of a mother making the roti and a daughter translating it for her. I just thought it was really a sweet mother-daughter activity!

I have to say, I followed the video to the letter, although I did measure the ingredients so I could write a recipe here. I also used a cast iron pizza stone instead of a frying pan. And I definitely don't have the skill the lady in this video possesses! My roti were not perfectly round!

Watch the video first. Put flour in a bowl. Add the salt. Add  1/2 cup of water and mix with your hand (Yes, I used gloves! I always do!) and then add the remaining 1/4 cup of water. You can see in the video the consistency of the dough. If you need to you can add a little more water if necessary. Use the method in the video to "knead" the dough. Cover the dough and let it rest for 30 minutes to 1 hour.

Roll balls of dough (about 8), drop each in the flour and roll again and set aside. Use the method in the video to flatten the dough balls and then roll them out until they are about 1/8 inch thick.

Heat your skillet (I prefer any large last iron skillet) to high and cook the roti, again with the method in the video.

I think this flatbread can be used with many of the dished you might prepare on a day to day basis in your own kitchen. In the Indian culture roti and naan is served with vegetable and curry dishes. I think it would taste very good served with a salad on top! You could also serve it instead of bread in a sandwich or in place of a shell for a taco. I'm sure you can come up with some wonderfully creative ideas and you can make it at any time! These ingredients are in your kitchen right now, I bet!
37 Cooks members receive products from our sponsors to work with to create their posts; no other compensation is given. All content is solely the opinions of our members. Members also write non-sponsored posts that do not feature any products. These are not compensated in any way..