Please meet another one of our amazing new cooks, Brandie! 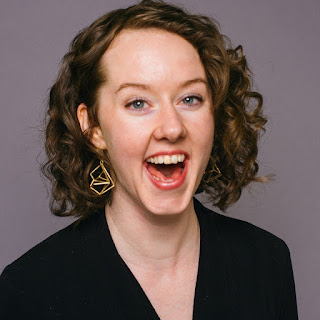 I was born and raised in Oklahoma. And ever since I was little, my dad had me doing prep-work for him in the kitchen. I was always the vegetable chopper and the taster. He just worked at a manufacturing plant, but cooking was his passion, and his hero was Emeril Lagasse. Every single day, he had his smoker going, even on holidays. Everyone in the neighborhood hated it, because you would smell like bar-b-que if you walked out of your house if you lived on our street, or even a few streets over.

My dad was always trying new things. Jalapeno jelly rub on a rock salt roast, or chili dog burritos (I did mention it was Oklahoma, right?). I remember once we dug a hole in the back yard to put hot coals in. We wrapped beef, mushrooms, bell peppers and onions in aluminum foil, put it on the coals and buried it for hours. When it was dinner time, we dug it up. I remember not being too impressed with the flavor, but getting to experiment with new ways of cooking was one of the ways I felt most free growing up.

When I was just in elementary school, my veggie of choice was not a vegetable at all, it was mushrooms. I'd take out the stem and stuff the mushroom with different things, cut them up and made a "floating mushroom soup" which was probably just chicken broth and other chopped vegetables with mushrooms floating on top. My dad had wanton wrappers and my sister and I would stuff mushrooms in those too.

As I got older, I was still trying to mature as a cook, though I believe I was using Cajun seasoning on nearly everything. In high school, my sister and I would prepare (what we imagined) were grand lunches for our friends. Some of the dishes were fairly ambitious for only having 40 minutes or so after driving to and from the school. Our biggest success was taco salad, I think. Cooking the shells, meat, heating the beans, chopping the lettuce, tomatoes, and making guacamole was a big feat to us two teens.

In college, I finally created my first really good recipe (that I still use to this day) at 24 years old; almond-crusted brown sugar chicken. I'm probably not the first person to combine these ingredients, but I was very proud of myself for putting a delicious dish together on my own rather than using a recipe. At that point, I was still using lots of frozen and canned ingredients.

Then, 5 and a half years ago, I moved to Portland. I couldn't believe how good even the bar food was here. I realized then the importance of fresh ingredients, and started buying more and more fresh veggies and locally raised meats. Now, the only frozen items I use are peas, and the meat I've purchased or helped my friends process on their farm.

About 3 years ago, I believe, is when I started becoming the home cook I am today. I put a picture of the dinner I made on Facebook, and my cousin (a chef in Oklahoma) told me I needed to work on my plating. "What? Why? I'm just going to eat it". But then, I started looking into plating, and realized what an incredible world I'd been missing out on. I find that when I do a search for whatever dish I'm trying to make and the word "plating", I find re-imagined dishes that inspire me even further. I come across recipes I'd never heard of before like "potatoes pave", and "Veloute". 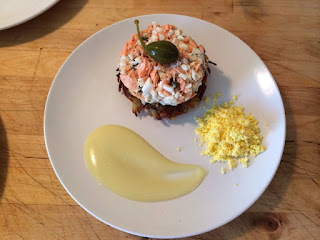 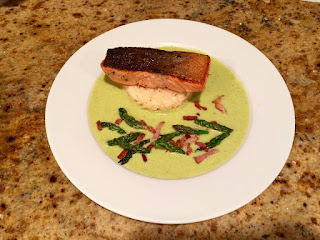 My cooking these days is part experimentation, part quilting recipes together. I'm still very much in the learning phase, but I think we should always be in this phase. When I see a dish somewhere, or my husband brings home a new vegetable I haven't cooked with much, I start researching. I look up a variety of things that can be made with whatever the ingredient is. Then, when I decide on a dish I want to make, I look up many variations of the dish. I look for commonalities among the recipes and weave them together, and either pick and choose alternate ingredients from the other recipes, or come up with something on my own. 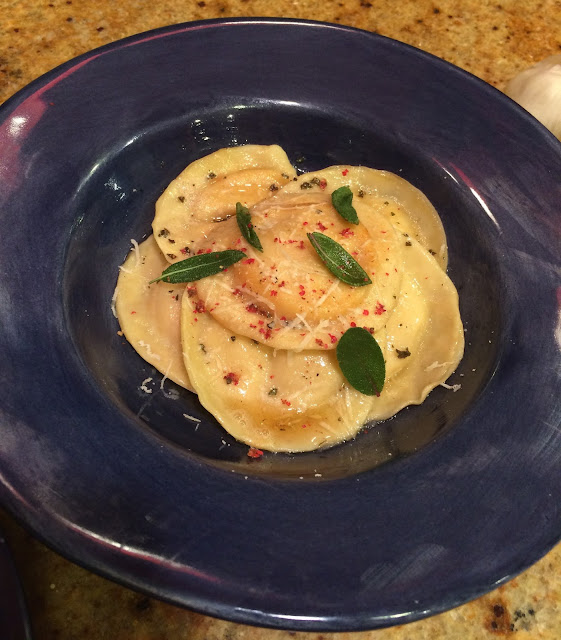 My husband brought home a butternut squash. He loves anything pumpkin or squashy any time of year, really. He's usually good about waiting until fall, though. I knew he wanted me to make ravioli though, because that's the only thing I've ever really made with butternut squash. This time, though, I did use most of the squash to make a butternut squash soup, but decided to share the ravioli recipe, because it's my favorite of the two. Additionally, this recipe is just for two, so double up if you've got more mouths to feed. My niece loves to help in the kitchen and so do my friends, so this is a good one to do with others as long as they're patient!

Start by preheating your oven to 400°F. Cut the stem off the top of the butternut squash, then cut in half lengthwise. Scoop out the seeds, then lay cut-side up on a slightly greased cookie sheet. Use any amount of softened butter you'd like to cover the cut side of the butternut squash, then sprinkle with salt and pepper. I like to put a dollop of butter in the scooped out part of the squash also. That way, periodically while it's baking, I can dip a brush in the butter, and baste the squash throughout the cook-time. Bake for one hour.

While the squash is baking, you should have plenty of time to make the dough and let it rest. Combine the flour and salt into your mixer with the flat beater attachment. Add the egg, and olive oil, and increase the mixer speed until dough is sticking together well (which should only take a minute). Take the dough out "work the dough" by folding it over and pushing it into itself. Do this until your dough looks consistent and can form a nice, tight ball that "springs" back slightly when you make an indent. Cover your ball with clear wrap and let it rest for at least 30 minutes at room temperature.

Once the squash is soft, take it out of the oven and let cool before scooping the squash out of it's skin and puree. Measure out two cups for the filling and reserve the rest to make a butternut squash soup (like I did!) or add it to a broth to use for butternut squash risotto.

Heat a pan with olive oil, and saute the chopped shallot until translucent and slightly golden (medium heat). If the pan is dry, add more olive oil, or at this step, you can choose to add butter instead. Add the two cups of butternut squash puree and saute until the mixture becomes slightly dry. While sauteing, add salt, pepper. Add in the cream, Pecorino, and nutmeg. At this point, I like to use my immersion blender to make the filling smooth, but it's fine to leave it as is. Make sure the mixture is thick enough that it's not runny. Let mixture cool to room temperature.

Once your mixture is cooled you can start rolling out your pasta. You don't want to roll your pasta out ahead of time because it will dry out if you leave it too long. I like to cut my dough into quarters like so:

I do this so that when I'm done cutting out the raviolis from one quarter, I can take the extra dough and roll it out into the next quarter creating less waste. When you roll out pasta (if you have a pasta machine), you pass the pasta through the largest setting several times folding it in half once before putting it through. You want to make sure your pasta dough is a nice, consistent color and texture before putting it through the thinner settings. I pass mine through all the way down to 7 before cutting the raviolis.

For the raviolis, I use a cookie cutter. There may be easier ways, but I like the look of big, plump raviolis in a bowl. I cut out two circles per ravioli, take one side in my hand, place a tablespoon of filling in the center, dip my finger in water to run around the edge of the bottom circle of pasta, then place another circle on top, pinching the edges together and pushing out any air. You want the edge of the ravioli to be as thin as the center, so make sure you're putting some pressure in when you're pinching the sides together. As long as your dough is still pliable, you shouldn't have a problem. If your dough got dried too much, try using a little more water, and using the tines of a fork to press the outside edge together.

This part of the process is usually the fun part to have help on as it's the most time consuming. I usually like to have 5 or six big raviolis per person.

When you're nearing the finish line for putting the raviolis together, put a pot of water on high to boil (make sure to add salt!). Once the water is boiling, put the raviolis in for no more than 2 minutes. Drain the raviolis.

To make the brown butter sage sauce, put half a stick up butter in a pan on medium heat. Right before the butter starts to brown, add minced sage leaves. Once butter is brown, add in raviolis and delicately move them around in the pan with the butter. Do this for only a few minutes.

Place Raviolis in each bowl delicately, and drizzle a tablespoon or two over the top of each. Crack pink peppercorns over the top, and grate some Pecorino over each bowl.

For the garnish, I also like to fry up a few sage leaves in some olive oil, and salt them immediately after removing them from the pan. Voila! Butternut squash ravioli in brown butter sage sauce!
37 Cooks members receive products from our sponsors to work with to create their posts; no other compensation is given. All content is solely the opinions of our members. Members also write non-sponsored posts that do not feature any products. These are not compensated in any way..