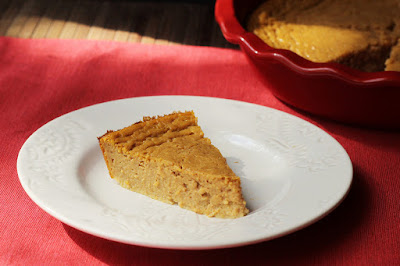 This recipe comes via The Los Angeles Times California Cookbook. Originally published in 1981, it definitely qualifies as retro.

Based on the "Impossible" pies made famous by Bisquick, this pumpkin pie is a little lighter, creamier, and fluffier than the typical super-dense pumpkin pie.

The pie had a few cracks on the top, but that's pretty simple to hide with a dollop of fluffy whipped cream or a scoop of ice cream.

While the recipe claimed that this pie made its own crust, don't be looking for something as thick as a typical crust. But, amazingly, it was enough crust to keep the slices of pie together. While I love flaky pastry crust, I thought this was a nice departure from the usual. 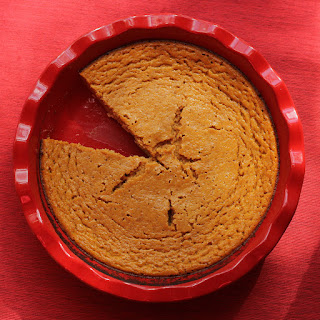 Preheat your oven to 400°F and spray a 9" pie pan with baking spray or oil. Or butter the pan.

Combine all of the pie ingredients in a blender an blend until well-mixed and smooth.

Pour the mixture into the prepared pan and bake at 400°F for about 30 minutes, or until a knife inserted halfway between the edge and center of the pie comes out clean.

Remove the pie from the oven and let the pan cool on a rack until it's room temperature, then refrigerate until fully chilled.
37 Cooks members receive products from our sponsors to work with to create their posts; no other compensation is given. All content is solely the opinions of our members. Members also write non-sponsored posts that do not feature any products. These are not compensated in any way..