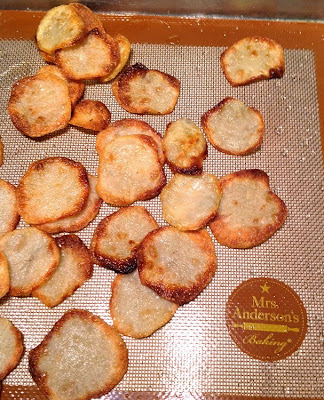 The 1940's food writers Cora, Rose and Bob Brown wrote in their book "America Cooks": “A century ago, when Saratoga Springs was in its heyday as a fashionable resort, specialties from there swept the country, and one of them, Saratoga Chips, will endure as long as there are spuds left to slice.”

Is the name not ringing any bells? How about potato chips? The craze for thin crispy potato chips began in 1840's Saratoga Springs, New York. There are lots of stories about just who was the customer who wanted pan-fried potatoes sliced even thinner, to get even crispier - but let's not fuss about that. Let's get right to making fresh chips at home - right in the oven, using very little oil. That makes these chips healthy spuds!

Slice potatoes very very thinly: I used my mandoline and cut them in even 3-mm slices, or about 1/8" thick. Toss the potato slices gently with olive oil, making sure to separate and turn the slices. Place the sliced potatoes on a baking sheet covered with parchment or the new Mrs. Anderson's Baking Mat from Harold Import Company. The potato slices should not overlap, but you don't have to worry about spacing them; they don't expand.

Sprinkle the potato slices with salt and pepper.

Bake uncovered about 10 minutes, then turn them and bake until they are golden and browned in spots, about 10 more minutes. Blot on absorbent paper and serve while still warm.

Saratoga Sweets - use peeled sweet potato. I like these dusted before baking with a bit of cumin and Aleppo pepper.
37 Cooks members receive products from our sponsors to work with to create their posts; no other compensation is given. All content is solely the opinions of our members. Members also write non-sponsored posts that do not feature any products. These are not compensated in any way..