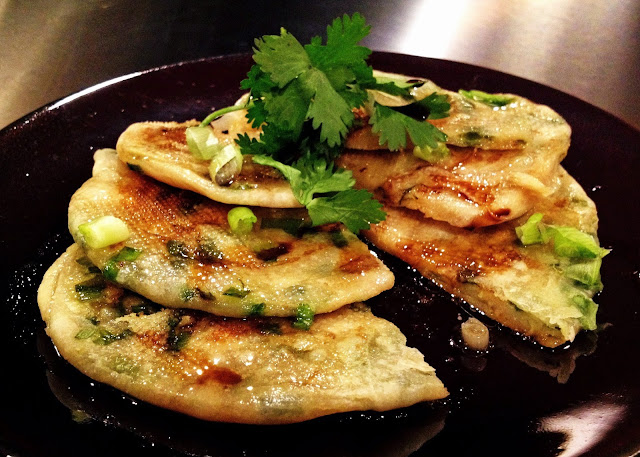 After receiving Mrs. Anderson’s Bread Crisping Mat from Harold Import Co., I was indeed challenged to come up with a suitable recipe. I do not bake very often and when I do, it is usually something savory. Well, scallion pancakes turned out to be the perfect item. While traditional scallion pancakes are usually pan fried in oil, these pancakes crisped up nicely in the oven, no doubt because of the perforations in the mat, which allow air to circulate around the dough. These came together relatively quickly, with only a handful of ingredients. And, since it uses less oil to cook, this recipe will become a regular in my kitchen!

For the sauce: In a medium bowl, whisk together soy sauce, sesame oil, scallions, ginger and vinegar. Season to taste with salt and white pepper and set aside.

For the pancakes: In a large bowl, mix flour with hot water until it forms a smooth dough. Knead by doubling dough over and pressing down. Repeat until dough becomes more smooth and elastic. Drizzle dough with about 1 teaspoon sesame oil to coat. Cover bowl with plastic wrap and let rest for about 45 minutes to an hour.


Meanwhile, finely chop scallions, and arrange on your work surface along with a dish of kosher salt, a dish of sesame oil, and a dish of peanut oil.
Cut the dough into four equal parts. Lightly oil your board, counter top, or back of a large metal baking sheet. Roll out one part of the dough with a rolling pin, until it is a thin rectangle approximately 12 x 9 inches.

Lightly brush the surface of the dough with sesame oil, then sprinkle it evenly with chopped scallions and kosher salt. Starting from a long end, carefully roll up the dough tightly, creating one long “snake” of rolled-up dough. Cut the dough snake in half. Take each half and coil into a round dough “snail.” Set aside and let rest. Continue with remaining dough until you have eight coils.

Using your hands or a floured rolling pin, press each coil of dough into a flat, smooth, and round pancake. Brush the top of each with peanut oil, then flip, oiled side down, onto the mat. Bake for five minutes, brush with more oil, then turn over. Brush tops with a little of the prepared dipping sauce, and continue cooking until slightly brown and cooked through, about five minutes more. Do not crowd pan; cook in batches if necessary.

Remove from pan and cut into wedges. Garnish with cilantro and scallions and serve hot with dipping sauce.
37 Cooks members receive products from our sponsors to work with to create their posts; no other compensation is given. All content is solely the opinions of our members. Members also write non-sponsored posts that do not feature any products. These are not compensated in any way..