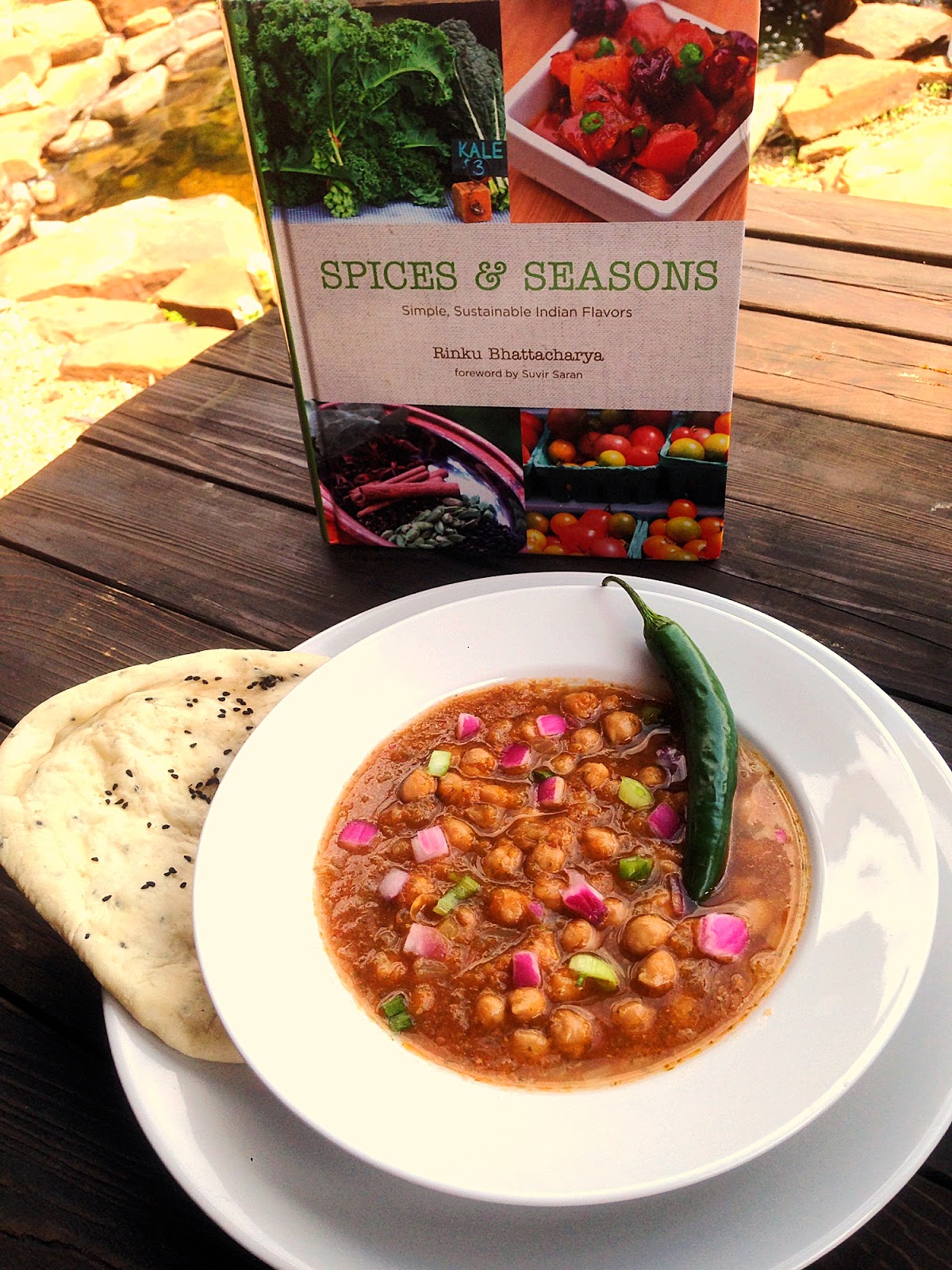 Spices and Seasons is a beautifully written cookbook that really does attempt to bring Indian cooking to the average American kitchen. The author, Rinku Bhattacharya, is attempting to live "greener" and cook in a more sustainable manner. I love some of the advice that she gives in the introduction, and I also like how the recipes are labeled as a "vegetarian", "gluten-free", etc. This is very helpful to a home cook.

I actually had to read through the book about five times before deciding on a recipe to make and review for this post. There are honestly about 40 recipes that I want to try as soon as possible. But sadly, I live in an area without many ethnic markets or stores, and I did have difficulty finding a few of the key spices recommended for many of the recipes (I'm in a suburb of Houston.) I have ordered them from Amazon, but they will not be here in time to complete my review.

So, I needed to choose a recipe that included completely local and locally found ingredients. My family members and housemates have also been wanting to try more "meatless" meals, so I felt that this would be a great time to experiment with one of Rinku's favorite chick pea dishes as a main course. I doubled her original recipe (for four men and myself) and ended up substituting some of the green chili peppers with green bell peppers (a substitution that she approves of, page 30.) I did not want to scare anyone off with excess heat!

Aside from that modification, I simply doubled everything else. I did sauté my onions and ginger in two small batches (the original size), so as not to lose the integrity of the recipe. I also served with both chopped scallions and fresh red onions (another recommendation), in order to get feedback with the slight modifications.

Overall this recipe was very easy to prepare. It did have a nice heat level, but the spice that lingered afterwards was the more dominant flavor. The ginger also mixed well with the peppers and lended the dish a sweet type of heat. I served a green salad beforehand, and then we ate the chickpeas with naan, raita and harissa. This would be a great dish to serve on a cool, rainy day. It is very filling and comforting, so I can see why it is one of the author's favorites. I will be making this dish again, and I am excited to try many more from this book!

This recipe did make a lot of food, but it refrigerated very well and it tasted great the next day. In fact, it held up very well in the refrigerator for 2 to 3 days and was a great dish to come home to after a weekend vacation. We served ours with a simple green salad and some naan bread. If you would like, top each serving of the chickpeas with chopped red onion or scallions. It makes a very pretty plate, and tastes delicious. Enjoy!

Rinse the dried chickpeas 2 to 3 times and then place in a bowl of water. Allow to stand in the water for about 1 hour. While the chickpeas are soaking, heat 3 Tablespoons of the grapeseed oil over medium heat for 1 minute in a large skillet. When the oil is heated, add 2 cups of onion and 6 cubes of ginger. Let the onions and ginger cook for about 7 minutes, over medium heat, stirring often. Remove the onions and ginger from the stovetop, and set aside. Repeat the process with the remaining grapeseed oil, onions, and ginger.

To make the pepper mixture, simply place the jalapeño, serrano, green bell pepper, cilantro, tomatoes, and cumin in a blender. Blend well until all of the large chunks have been reduced, and you like the texture of the sauce.

After the chickpeas,onions, and ginger have cooked on low for 6 hours, uncover the slow cooker, add the pepper sauce, and mix well. Place the slow cooker back on low heat for 2 more hours. After the 2 hours on low, check the mixture and see if the chickpeas are done. I turned my slow cooker up to the high setting and continued to cook for 1 more hour. After the hour on high heat, I uncovered my slow cooker and allowed it to continue cooking for 1 more hour on high heat, in order to reduce the liquids in the pot. I believe that my batch of chickpeas took longer to cook because I did double the recipe.