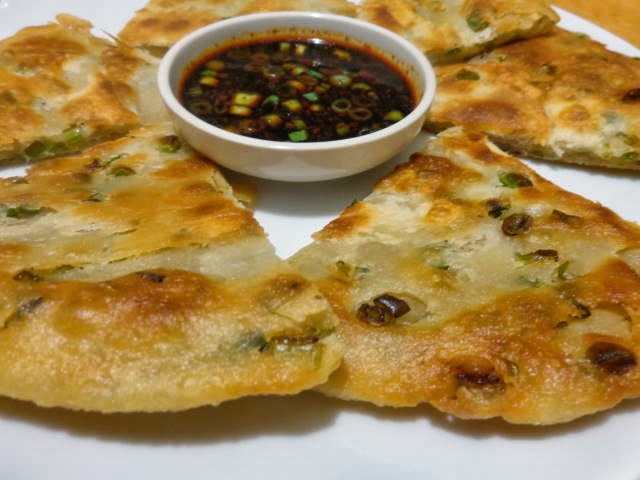 Scallion Pancake with Chili and Ginger Dipping Sauce
by Christine

In a food processor, with the metal blade, mix the flour with the boiling water until a ball forms. Remove and knead a few times to ensure flour is well-blended. Wrap in plastic wrap and let rest for 30 minutes.

In a small bowl, mix the sesame oil with the Tablespoon of canola oil and set aside.

For the chili and ginger sauce, mix the soy sauce, vinegar, sugar, ginger, chili, cilantro and 1/4 cup of the scallion in another small bowl. Set aside.

Roll up jellyroll style and then, holding both ends, twist the dough a few times. Roll the dough into a coil, tucking the end into the middle to hold it and then roll the dough into a very thin circle. Lightly brush the dough with the sesame oil on both sides and fry for 5-7 minutes on both sides or until golden brown. Drain on paper towels and cut into 6 pieces. Serve hot with the chili and ginger sauce.
37 Cooks members receive products from our sponsors to work with to create their posts; no other compensation is given. All content is solely the opinions of our members. Members also write non-sponsored posts that do not feature any products. These are not compensated in any way..