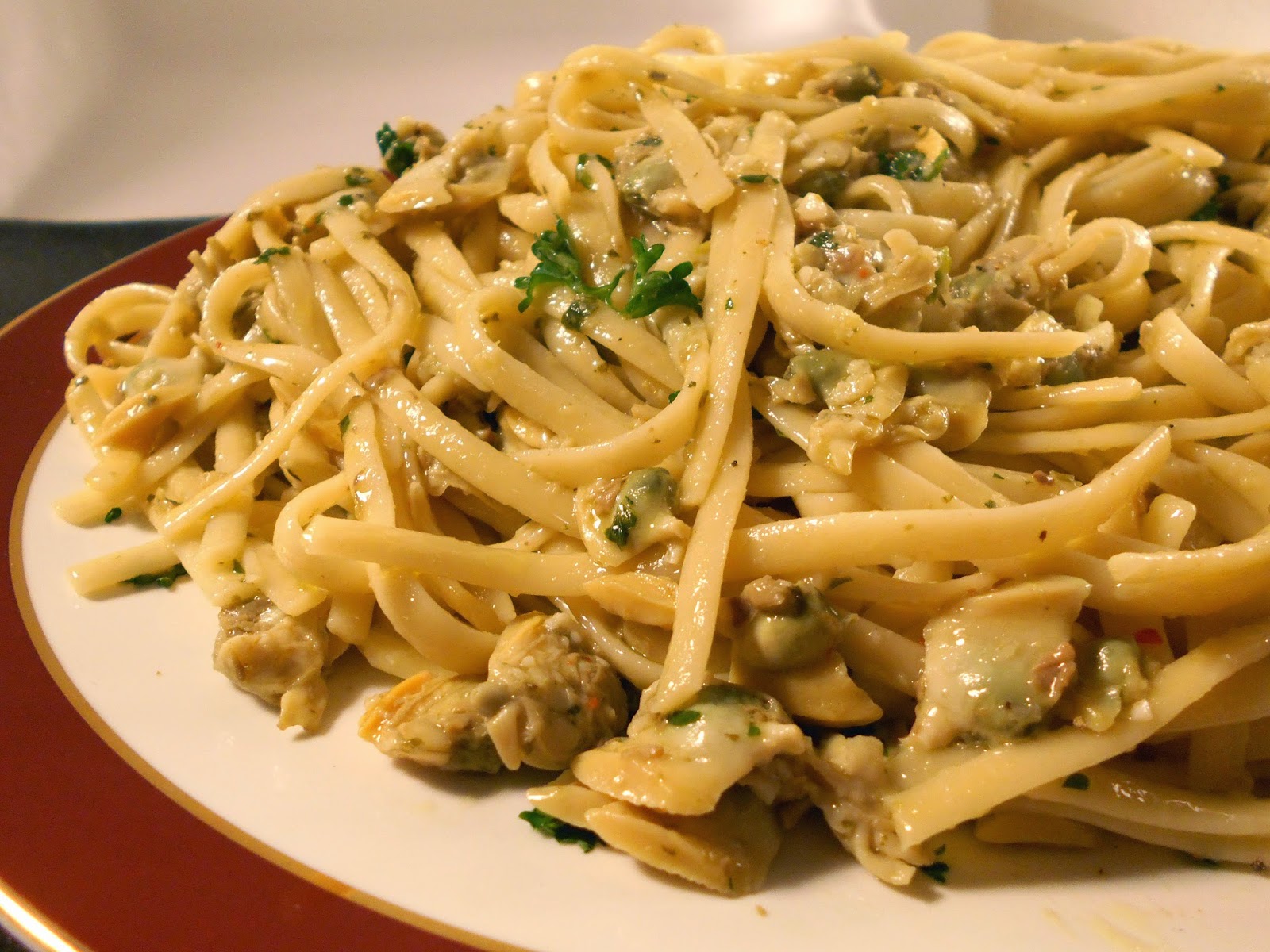 Lotus Martin made Linguine with Clam Sauce at every occasion she could. Whether or not it made sense, the big silver pot of garlicky goodness just seemed to work with whatever was going on: Easter (with Chinese buffet), July 4th (alongside barbecue), Halloween (with grape eyeballs), Thanksgiving (next to turkey), Christmas (with prime rib). Lotus, more than an aunt, more like a mother, was a major influence in my life. As I grew up, I learned to cook from Lotus, and this recipe was one of the things she taught me. The first time I watched her cook it, it seemed like a terribly haphazard process: Glugging what looked like an insane amount of olive oil into a pan, filling the pan to the brim with a ton of other liquids and chopped up stuff, and just when I thought it couldn’t handle any more, it would end with an enormous amount of buttered pasta. Once tossed to combine, it would miraculously create the most delicious, the most luxurious, and the most comforting pasta dishes I’ve ever eaten.

Of course, I wanted to cook it with her. When I asked her for the recipe, she produced a tiny, stained square that had been cut from the back of a pasta box. As I followed the directions and chopped what I thought was a ¼ cup of parsley, she’d say, “chop some more.” After I crushed and minced 3 cloves of garlic, she told me, “do a few more.” When it was time to add the vermouth, she urged me “keep going.” I soon learned that Lotus didn’t follow recipes. As in life, she might follow a format, but just kept going and cooking until things just felt right. That was how she did it. She also taught me to be okay with mistakes. That first time I cooked this recipe, I burned the hell out of the garlic. But I didn’t know it. She let me continue with the recipe, and when I tasted the sauce, I exclaimed, “ew!” She said, “that’s okay, Toots.” She emptied the pan and we started over. The next time, I watched carefully as the garlic sizzled and just started to brown. “Now,” she said. And as I poured the vermouth into the pan, and the olive oil swirled and created lovely shapes, and the aroma hit my nose, I knew I could create beautiful, wonderful things by cooking. She taught me these things, and she taught me to share my love of cooking with those I care for and love.

This recipe is in honor of Lotus. It’s not as good as hers and it will never be, because she’s not here to cook it, and she’s not here to tell you about how this batch isn’t quite as good as it should be because of this, that, or another thing. But it really does remind me of her. And I’ll settle for that.

*Most jarred clam juice is more flavorful than that from the canned clams.

Fill large stock pot with 6 quarts water. Season liberally with salt, and bring to a boil. Cook linguine according to package directions until slightly under al dente; drain, reserving two cups of liquid.

Meanwhile, heat olive oil over medium high heat. Add garlic cubes and cook, until just melted and beginning to sizzle, about 30 seconds. Do not burn. Add vermouth or white wine, and clam juice. Increase heat to high. Bring to a boil for 30 seconds, and reduce to simmer. Add clams, basil and half the parsley. Season to taste with white pepper, black pepper, salt, and Aleppo pepper. Swirl in butter.

Add pasta to sauce, stirring to mix well. Cover and simmer over very low heat, until most liquid is absorbed, about 10 minutes, stirring occasionally. Stir and add reserved pasta cooking liquid if needed to moisten. Sprinkle with remaining parsley and serve.
37 Cooks members receive products from our sponsors to work with to create their posts; no other compensation is given. All content is solely the opinions of our members. Members also write non-sponsored posts that do not feature any products. These are not compensated in any way..