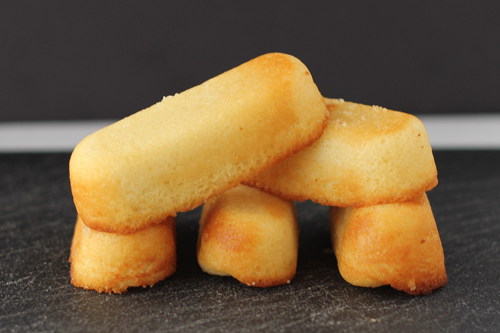 Donna's recipe is submitted for the Chopped Challenge Round Two Main Dessert Basket including the following items:

For the Twinkeez:
Spray the wells of a canoe pan with baking spray and preheat the oven to 350 degrees.

In a small bowl, combine the flour, baking powder, and salt. Stir to combine well.

In a larger bowl, beat the butter until it is smooth, then add the sugar and beat until the mixture is light. Add the egg and vanilla and beat until well combined.

Add the flour in thirds, alternating with the milk in halves, so you begin and end with the flour, mixing well after each addition.

Fill the wells of the canoe pan half-full with batter.

Bake at 350 degrees until the little cakes spring back when touched in the center and a toothpick inserted in the center comes out clean - about 20 minutes. They will be lightly browned.

Let them cool in the pan for about 10 minutes, then turn out onto a rack to cool completely.

For the banana filling:
In a medium bowl, combine the banana pudding mix and half-and-half until completely combined and thickened. This will be MUCH thicker than a standard pudding, which I think works better for the filling here.

You can make it thinner if you like, but keep in mind that although you'll be storing filled Twinkeez in the refrigerator (because of the dairy), you'll probably want to serve them at room temperature. The pudding will be a little thinner at room temp.

Twinkies are filled from the bottom, and that's how I filled these. I used a pastry bag with a long fat-needle-like tip. I'm sure there's a name for it, but I have no idea what it is. I just filled the bag with the cream, shoved the tip into the bottom, and pumped in the filling until I felt the Twinkee get fat and puffy. Three evenly-spaced punctures on the bottom, and I was done.

For the chocolate sauce, I just heated some half-and-half and dropped in some semi-sweet chocolate chips to make a thick sauce. I didn't measure, just added chips until I had what I wanted. Then I smeared it on the plate, in Chopped-presentation fashion.

Note: the actual filling in a Twinkie is more like a sugar-shortening combo, which is why it has such a long shelf life and doesn't need refrigeration. These home made Twinkeez will either need to be refrigerated after filling, or you'll need to fill them right before eating.
37 Cooks members receive products from our sponsors to work with to create their posts; no other compensation is given. All content is solely the opinions of our members. Members also write non-sponsored posts that do not feature any products. These are not compensated in any way..