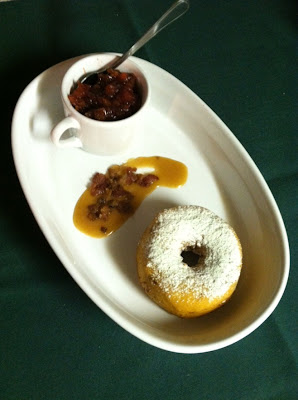 Aimee's recipe is submitted for the Chopped Challenge Round One Dessert Basket including the following items:

When the Chopped Challenge was announced, I immediately signed on. I love the show and I thought it would be fun to do at home. Oh dear. The baskets were announced, and while the first two were interesting, I felt the dessert basket was the most challenging so I decided to tackle that one.

What the heck was I going to make with this? I don’t think I've even seen a contestant on the show get a basket this crazy. So I spent most of the 2 week challenge thinking about what to make. It didn't help that I was sick with a cold and not feeling very creative in the kitchen. I also knew that I couldn't afford to try out several different concoctions before I finally found something that worked. I just couldn't afford a bunch of ingredients to practice with. So…I needed to conceptualize the dish IN MY HEAD so that when I was finally ready to purchase the ingredients, I could do so practically and create the dish one time.

It never occurred to me until the day before I assembled my dish to actually make a donut. I was just going to buy some! But I am not much of a baker and I didn't really want fresh donuts around the house either. I was at the store with my 6 year old when she asked me to buy the canned cinnamon rolls. It’s not something we usually have but it hit me that I’d seen people on TV make donuts with canned biscuit dough and this was pretty much the same thing so I purchased a small can of the cinnamon rolls. Voila! Instant donut!

I made the individual components a few days before I assembled the dish, and put it all together with only one day left in the challenge. I think I did pretty well and was very proud of my accomplishment. We actually ate this dish together, me and my daughter, and she never suspected there were pickles and anchovies in there!

Drain the anchovies, rinse and soak in warm water overnight (this will remove some of the fishiness). When you’re ready to make the peanut butter sauce, drain the anchovy water, pat dry and dice.

Make the Peanut Butter Sauce by combining peanut butter, heavy cream, sugar and corn syrup in a small saucepan over medium-low heat. Add ½ tablespoon of anchovies to the peanut butter sauce and continue until ingredients are melted and creamy, about 7 minutes. The sauce may be made and refrigerated up to 5 days ahead.

Dice the apple, plum and pickles and add to a small saucepan. Add the orange zest, juice, vanilla, cinnamon, sugar and apple cider vinegar. Cook over medium-low heat for 20 minutes. The compote should resemble a chunky applesauce in texture. This mixture may be made and refrigerated up to 5 days ahead.

Dice 1 strip of bacon and remaining ½ tablespoon of diced anchovies. Saute in small saucepan until crispy. Drain and set aside.

Heat the oil for the donut in a heavy bottomed saucepan or deep fryer to 350 degrees. Add the cinnamon roll biscuit to the hot oil and cook for approximately 8 minutes, until golden brown on both sides. Drain and set aside. If the peanut butter sauce and compote are refrigerated (as they were in my case), gently warm both and add a little more heavy cream to the peanut butter sauce until you get the desired consistency.

To plate, sift the crushed candy heart mixture over the drained donut. Add the compote to a small bowl or cup. Spoon the peanut butter sauce on the plate, add the crispy bacon and anchovy mixture atop the sauce, and serve.