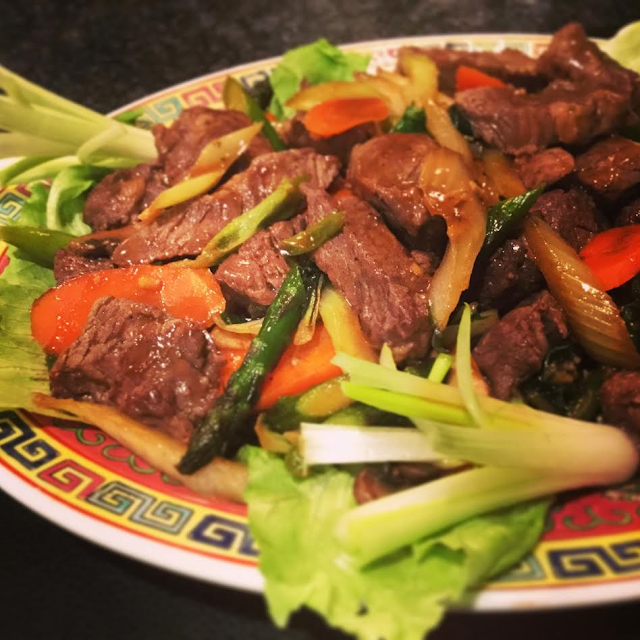 My parents owned Gee's Restaurant in Houston, Texas for over 35 years. Opened in 1955, the menu featured dishes that were truly the epitome of Cantonese cuisine: Chicken Chow Mein, Egg Foo Young, Sweet & Sour Pork, Moo Goo Guy Pan, and War Shew Duck. I often wax nostalgic about the restaurant and these dishes, and make my own versions as often as I can. One of the classics on the menu was #66 - Steak Kue. At the restaurant, it called for searing one of our "Club Steaks" (boneless ribeye) on the flat top grill, which was on the "American" side of the kitchen, then carried over to the "Chinese" side of the kitchen. There it where would be cubed and added to a wok full of vegetables, and finished with a quick sauce that included "a Touch of Oyster Sauce." 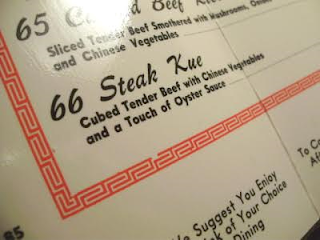 For my version, I wanted a wok-friendly way to cook the steak, so I simply gave the cubed ribeye a quick flash stir-fry, then cooked all the vegetables, adding the steak back in at the end. The assortment of vegetables can be anything you wish, but the key to this dish is truly that "Touch of Oyster Sauce."

I hope you enjoy this retro recipe as much as I did!

Heat a wok or large skillet over high heat. Season beef with salt and pepper. Add oil to wok, and swirl to coat. When oil begins to smoke, add beef in a single layer. Cook for 30 seconds or until beef begins to release from wok. Turn and cook another 30 seconds, until well-browned. Remove beef from wok, keeping warm on a platter. Leave behind only about 1 tablespoon of oil (add more if needed). Add ginger, garlic, and next 7 ingredients. Toss to combine. Add light soy sauce and sherry, stir, and cover for 1 minute to steam. Return beef and any accumulated juices to the wok, then add dark soy sauce, oyster sauce, and cornstarch slurry. Stir to combine, and cook until sauce forms and thickens, about 1 minute more. Drizzle with sesame oil, remove to a serving platter, garnish with green onions, and serve immediately with steamed white rice.
37 Cooks members receive products from our sponsors to work with to create their posts; no other compensation is given. All content is solely the opinions of our members. Members also write non-sponsored posts that do not feature any products. These are not compensated in any way..