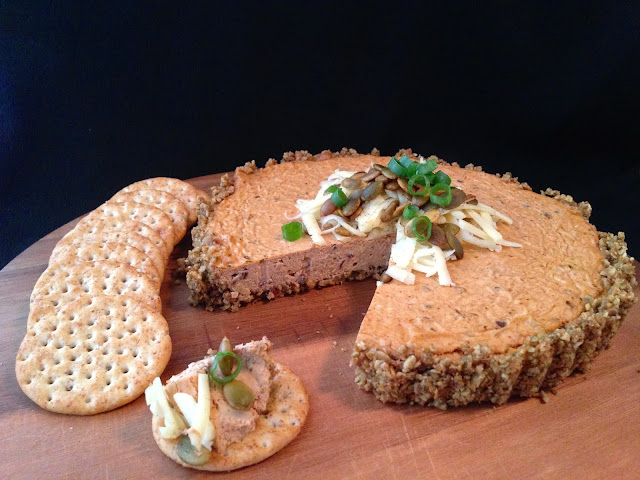 Several years ago, a friend brought a chipotle cheesecake to a potluck at work. I had never had a savory cheesecake before, but immediately fell in love. It was delicious! I decided to make mine with a blackened pumpkin seed crust, which goes perfectly with the smoky chipotle flavor. It is served like a cheese ball- cut out a wedge and spread it on crackers, slices of zucchini or cucumber. The cheesecake gets spicier after baking, so if you don’t want it too hot, add a little less adobo than you think you’ll need.


For crust: combine ground pumpkin seeds, cracker crumbs, and melted butter in small bowl. Press into bottom and up sides of 7” tart pan. Bake for 10 minutes. Remove from oven and let cool while making filling. Decrease oven temperature to 325°F.

With an electric mixer, whip cream cheese until light and fluffy. Add egg, sour cream, half and half, and salt. Mix until thoroughly combined. Mix in chipotles and adobo on low speed until combined.

Pour cheese mixture into crust. Bake for 20 minutes. Remove from oven and let cool completely. Refrigerate until ready to serve.
37 Cooks members receive products from our sponsors to work with to create their posts; no other compensation is given. All content is solely the opinions of our members. Members also write non-sponsored posts that do not feature any products. These are not compensated in any way..