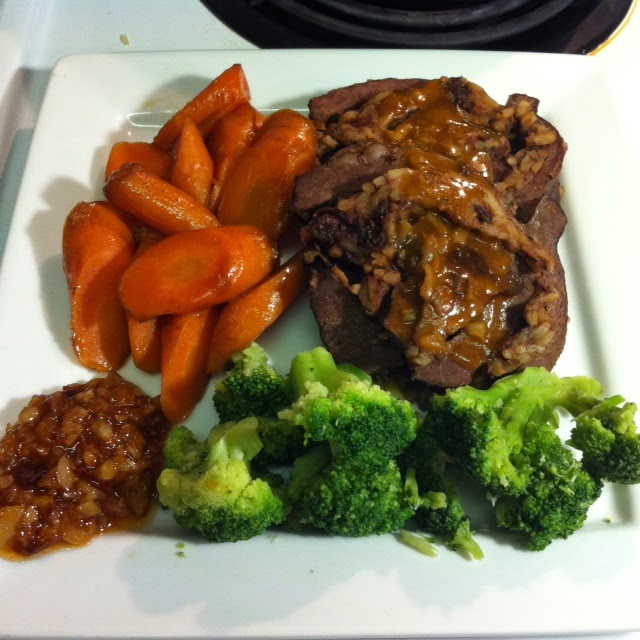 The fine folks at Slap Ya Mama have issued all of us at 37 Cooks an unusual challenge! They provided up with some of their products, and asked us to devise recipes, but we had to improvise, as we weren't allowed to use the recipe that the product was intended for! For instance, they sent me a box of Red Beans and Rice, which obviously, were meant to be served as Red Beans and Rice, but I had to come up with something different. I love using unusual ingredients in my cooking so I decided to use some of the beef heart that I had in the freezer, and make some kind of stuffing with the Red Beans and Rice! I doubt that there's too many people with a nice beef heart in their freezer, so you could substitute a boneless boston butt, which would work great. The fattiness of the pork would put this dish over the top. IF you decide to use the pork, you don't need to make any other changes to this recipe. I served this with whiskey glazed carrots, broccoli, gravy, and a little onion garlic 'jam' on the side. Here we go!


Stuffed and Slapped Beef Heart
by Matt the Butcher

Prepare the Red Beans & Rice according to package directions, and set aside to cool. Prepare the beef heart (or boneless Boston butt), by slicing it open, kind of the way a jelly roll opens up. Start at one side, slice about 1/2-inch thick, almost to the bottom of the meat, then at the bottom of that cut, turn your knife 90°, and make another cut, almost to the edge, and continue that way. The object is to have one piece of meat about 1/2-inch thick, unrolled on your cutting board so you can spread the stuffing on it, and roll it up like a jelly roll. Set that meat aside. Saute the onions,celery and garlic in the olive oil on medium heat, until the onion starts to soften. Turn off the heat and add the raisins, and 1 teaspoon Slap Ya Mama Cajun Seasoning and stir to combine. Let cool until its cool enough to handle, and mix into the Red Beans and Rice.

Spread stuffing onto the beef heart and gently, so you don't squeeze the stuffing out, roll up like a jelly roll and secure with a few skewers to hold it together so you can tie with the kitchen twine. Start tying the meat at both ends, then work towards the middle, not tying too tight. If any of the stuffing falls out don't stress about it, just stuff it back in the ends. Place meat in a baking dish, add the 2 cups of broth, and any stuffing that is left over. Sprinkle the meat with the remaining Slap Ya Mama seasoning. Cover tightly with foil, and bake for about 3 hours, until a knife easily pierces the middle of the meat. Take meat out of the roasting pan and tent with foil while you make the gravy, which is the easiest and tastiest gravy in the world!

For the gravy, just combine in a sauce pan the Slap Ya Mama Etouffee Sauce, 1 cup drippings from the roasting pan, any bits of vegetables or stuffing from the pan, and heat till almost boiling. Taste and adjust seasonings, if needed. Slice heart carefully into 1/2-inch slices, plate it, and pass that gravy!!

*I often come up with some very 'odd' concoctions, and the onion garlic 'jam' that I served this with was off the freakin' charts delicious. Start to caramelize a large, finely chopped onion in a little olive oil, when that starts to turn brown, lower the heat a little and add a whole head (yup, I said a whole head) of finely chopped garlic. Cook until the garlic is very soft, but don't let it get brown. Now, add 2 to 4 Tablespoons of sweet chili sauce (available in most grocery stores in the ethnic aisle.) That's it! The 'jam' ought to be fairly thick, so just add the chili sauce one Tablespoon at a time, until you get the consistency that you like.

Made in America, with love, by Matt the Butcher !
37 Cooks members receive products from our sponsors to work with to create their posts; no other compensation is given. All content is solely the opinions of our members. Members also write non-sponsored posts that do not feature any products. These are not compensated in any way..